The Cincinnati Bengals made it the Super Bowl in 1982 and 1989, falling to the San Francisco 49ers both times. I have no memory of the first loss, but I do remember the Bengals of the late 80’s, led by Boomer Esiason and Ickey Woods and the SWAT Team. It was a good time to be a Bengals fan. But since then, it’s been a bit of a rough run for the Bengals, who have been inept for almost two decades now, and have reached a point of mediocrity that continues to give fans false hope.

Jess Stoner of American Short Fiction asked me to contribute a paragraph on the Bengals to their 2013 NFL Preview, which I happily fired up for them. You can read my two cents here. Every writer was asked to write a brief “literary” write-up of their team. My literary connection to the Bengals is Grace Paley, specifically her story “Conversations with My Father.” The idea played with Mike Brown, the current Bengals owner, trying to live up to the idea of his father, Paul Brown, who founded the Bengals. It really does make sense. I think. Other contributors to the Best NFL Season Preview Ever includes Cathy Day, Salvatore Pane, Rachel Yoder, Lincoln Michel, Patrick Somerville, Richard Thomas, Anne Valente, Aubrey Hirsch, and many others.

Since Strategies Against Extinction was released, I’ve been asked to write things and give readings, and almost always, I say yes. When Jess asked for my contribution, I jumped all over it, but I wasn’t entirely sure what to fire up for ASF. That’s the tricky thing about being asked for writing: usually, the editor asking is a writer herself and doesn’t want to put strict guidelines on you; on the other hand, they are asking me for a reason and need something fairly specific. Obviously, if I wrote Jess back and said “May I write about Dennis Lehane and the Boston Celtics?” she would have said “Um, no.”

So I sent two other paragraphs to Jess and said, whatchuwant? She went with the Grace Paley, which I too think is the best one. But I kinda enjoyed these other two, and since I have a blog, well, here they are. Silver and bronze metals aren’t so bad, are they?

Cincinnati Bengals, according to “Ethan Frome” by Edith Wharton

Ethan Frome was the worst book I read in high school. It was the book that made me think “Oh, yeah, that movie with Winona!” only the movie isn’t really about Winona and, anyway, wrong book. Ethan Frome is good, my teachers said, the same teachers that taught us Twain by assigning not Huck or Tom Sawyer but Pudd’nhead Wilson. Everything is backwards and wrong in Cincinnati, and Ethan Frome epitomizes this twistedness. The narrative is boring, the “drama” boring, and you know this story will end in tragedy. Bengals fan will tell you, with the intensity of a Pentecostal preacher, that the 2005 Bengals would have won the Super Bowl, hands down, that those Bengals were a great team. But it doesn’t matter. On the first passing play of their 2006 playoff game, Palmer fired a sixty-six yard pass to rookie wideout Chris Henry. It was the longest completion in Bengals playoff history and on this very same play, against the hated Pittsburgh Steelers, DT Kimo von Oelhoffen dove at Palmer’s left leg and blew out his knee. Game over. Steelers go on to win the Super Bowl. That’s the Bengals. Before that, the Bengals helped Joe Montana become Joe Montana. It’s what the Bengals do. Back to Palmer: did you see that: 66(6)? In case not: Chris Henry died in a car accident three years later. In American literature, Edith Wharton is important, my teachers told me. Sure. Whether Ethan and Mattie survive their suicidal sledding adventure (if you haven’t read the book, don’t laugh, that’s really what happens) doesn’t matter: there is no joy, no thrill here. It all ends miserably for everyone. Nice flashback, nice prose, eh yo, so what? It remains the slim book that is, somehow, the most boring, depressing, unreadable book ever written. And it is a book that is assigned, not one you would willingly read. Ethan Frome is the empty bottle of whiskey on a cold winter night when you’re too drunk to go to the store and too miserable to fall asleep. Ladies and gentleman, your Cincinnati Bengals!

Cincinnati Bengals, according to “The Road” by Cormac McCarthy

The Road opens in the cold dark of night. If that isn’t enough misery for you, the nights are described as “like the onset of some cold glaucoma dimming away the world.” Things don’t get any better from there. In a near post-apocalyptic future, a man and his son, on the constant verge of starvation, travel along a nameless road in the hope of finding safety and civilization. They are hunters and hunted in a bleak world of cannibalism and violence. Eating humans aside, it’s the kind of lingo familiar to the football fan who uses the vocabulary of war to describe the gridiron game. But you don’t get the Rooney family or the Mara family. You get the Browns, family owners of the Cincinnati Bengals, reduced to scavengers, occasionally getting lucky when finding an underground shelter stocked with food (a division title here and there over the course of their forty five year history), but mostly scared into desperate means of survival (Akili Smith, Dave Shula) fraught with risk. There is a scrim of hope at the end of the novel. The boy—let’s call him “Mike Brown”—isn’t alone in this belief: three playoff appearances (albeit, the one playoff game in the first round that no one watches) in the last four seasons. It is false hope. His father can’t save him, the world is a wretched place, and the cannibals (let’s call them “Bill Belichick”) are out there. And there isn’t any place to hide. 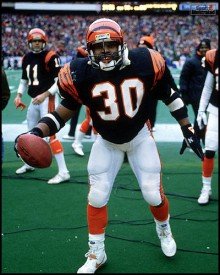