Once I took my first creative writing workshop in college, I was pretty much hooked. Ohio State is on a quarter system, so I had time to fulfill the requirements that Ohio State had towards having an English degree with a specialty in creative writing: five workshops, and the Advanced Fiction Writing class could be repeated three times for full credit. I had an aversion to poetry—which I thankfully grew out of—and determined that after Mary’s class, I could take four more creative writing classes: three in fiction, and one in nonfiction. This seemed like a good plan, and one that I stuck with until it was time to leave Columbus.

Junior year of college, in my memory, seems magical. Maybe not magical, that might be a bit of a reach, a bit sentimental and melodramatic. But junior year is when I hit my stride as a college student. I spent my freshman year not really sure what I was doing in college. I ate a lot of hamburgers and watched a lot of basketball. I was shy, a bit dorky, and liked to spend lots of my time by myself. It also probably didn’t help to have kept up my relationship with my high school girlfriend (note to incoming college freshman: go to college single!).

Sophomore year was worse. Trying to branch out, I moved out of the dorm I was in—where I roomed with my best friend—into an honors dorm. I had noticed my freshman year that I didn’t know any of the other honors students, and figured that I lived with other honors students, other people like me (though I had zero idea who I was)(on bad days, I still don’t), and that this would be a good decision. It wasn’t. I still watched a ton of basketball and didn’t go out and made zero friends. I tried going to Young Life; I tried Catholicism; I tried the crew team. Nothing really worked. I was miserable that year, and gave serious thought to dropping out of college—just for a semester, I told myself—and then everything would be okay.

I didn’t drop out. My best friend and I got an apartment together off-campus; I worked three jobs that summer, all of which were lousy. Like I said in my last post, I don’t really know what happened, but I came back to campus my junior year and felt like a completely different person, a college student ready for college and genuinely curious about what I was learning in class.

With this brand new attitude, I enrolled in my first Advanced Fiction Writing class. I walked into the workshop room, confident I had something going, and ready for the next incarnation of Mary Tabor.

Only, I really wasn’t.

I don’t think I was expecting another Mary, exactly. But I was not expecting a tall, striking, redhead with cropped hair, a business suit who—and this was the kicker—was standing. Standing!

She looked serious. She was serious. Deadly serious. The suit said so. But she spoke softly, directly, but with compassion. One hand rested on her belt, right arm cocked outward into a triangle of serious arm posture.

This was Stephanie Grant. As with Mary’s class, I’m fuzzy on what books we read in this class. I remember that we wrote at least one story, possibly two. That’s not what’s really important. What’s important is that I wrote a story called “Heat” and the attention given to my work is how Stephanie became such an important person in my life.

“Heat” was about a German immigrant named Heinrich who owned a greasy-spoon joint in downtown Cincinnati. Set during the summer, the story had tons of descriptions about the heat: the brutal humidity of an Ohio summer, construction work on the street, the steam and sizzle of the kitchen. A small boy comes into the restaurant, and Heinrich notices that the boy has signs of physical abuse. This triggers a flashback to when Heinrich was a youth, and a father who broke Heinrich’s fingers by repeatedly smashing them with a piano lid. Yet, for whatever reason, the boy runs away again, back into the street, leaving Heinrich to watch the boy disappear down the street and live again with his old nightmares returned.

I didn’t write a “good” story until the end of graduate school, so once again, the quality of the story isn’t important. It had a flashback. It was set in Cincinnati. It had some brutal physical moments. Back then, what most interested me about the story was the shape of Heinrich’s hands and that everyone called him “Heiny” (I thought this was phenomenally clever – it wasn’t).

After workshop, I asked Stephanie if I could re-write the story, and if she would read it again. She said yes.

Stephanie read, on her own time, at least two more versions of this story. I’m positive that the kind of revisions I made were super basic: no true sense of “re-vision”  or brand new scenes or significant character changes or trying to write the story completely different, but the kind of basic changes—a word here or there, a new sentence, maybe an improved paragraph—that young writers believe is rewriting. Nonetheless, Stephanie read every single revision. Carefully. She typed up a response to the work. She gave me margin notes, examined the words and sentences, used a highlighter to illustrate her points, and met with me to talk in detail about the choices I had made.

Obviously, she didn’t have to do this. And she didn’t have to take me seriously. But she did. Repeatedly. When I think about who and what I am as a writing teacher, my model is Stephanie Grant. She taught me the importance of taking myself, my work, and my craft as seriously as I possibly could. She treated my work like I was a colleague, even when there was certainly little to no sign the work was getting better, that I was really getting it. When there was no sign I was showing any talent or ability at all. I cannot emphasis enough how important it is to have a teacher believe so fervently in the writer. Not just the work, but me, just another third-year undergrad.

These are lessons I took to heart, lessons I have long kept with me (digression: also, on the bookshelf in Stephanie’s office was a book called Jesus’ Son. Hey, if Stephanie read it,  I’ma gonna read it! And it looked short! Denis Johnson blew my mind that winter and I’ve been hooked every since). I’ve been in touch with Stephanie over the years, periodically, less often than I’d like to. I remember her even talking then about her next novel, which ultimately took years before finally becoming the terrific novel Map of Ireland.

Every writer needs teacher like this to give us the direction to go forward with our writing. I’m just grateful I found mine so early. 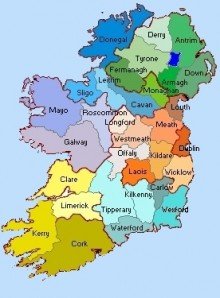