“Projection” is the second story in my collection. It’s about a college student, Monica, back in her home in small town Ohio the summer before she’s supposed to graduate. She works as a film projectionist in the lone movie theater in town, and she is bored and restless, a young woman yearning to leave the Midwest. This last summer, she starts a relationship with Philip, a guy a few years older than her who never escaped their home town. As the summer goes on, his behavior becomes more and more erratic, and her failed efforts to end their relationship leads to dire consequences.

But the initial idea for the story actually came about five years before I wrote the story at all. I was living in Boston at the time, and my friend’s younger brother, Ben, was working as a film projectionist at a national movie chain. We were (and are) both pretty big movie dorks. Ben worked as a projectionist, and one day he showed me how one person alone could run all fourteen films. The films aren’t on those old movie reels like one might imagine from early Hollywood; instead, they are on these massive silver platters and they rotate up and into the console to project the movie, and then once the frame is shot out onto the silver screen, the film wraps itself onto another platter. The film never has to be rewound so it’s always ready to start the next show. There was a switch next to every projector so he could get the sound and, effectively, watch every movie he wanted. But with only two or three new movies each Friday, he saw everything pretty quickly. So he always kept a pretty thick book with him, too.

This idea of a lone person running all these films lead to a character, Monica. There needed to be a problem, something at stake, and when someone is on the verge of graduating college “Who am I?” is a normal worry. This fear made the story move from an idea to a narrative. Picking favorite moments in an given story is always a challenge, but I would say the scenes between Monica and her mother was the one that was the most challenging and satisfying to write.

The original version of this story appeared in Crab Orchard Review. 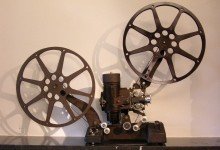