The Hunger Games film, based on Suzanne Collins’s young adult trilogy, has become the first blockbuster hit of 2012. In this dystopian fantasy world, set at some point in the near-future, the hero is a sixteen-year-old girl named Katniss Everdeen, who lives in District 12, one of a dozen districts of Panem. This country’s capital is called, well, The Capitol, which is the sole metropolis and has an iron-grip around the twelve districts. In retribution for starting a war nearly three generations ago, each district participates in The Hunger Games, an annual event in which one boy and one girl aged 12 to 18 from each of the districts are selected by lottery to compete in a televised battle to the death. All of this sounds like a pretty compelling setup for a movie.

Unfortunately, the movie’s incoherent and insulting narrative says something disturbing about its audience.

The books have been a tremendous success for Scholastic, a book publisher better known for publishing the Clifford books. The movie has made somewhere in the range (so far) of $700 million globally. The star, Jennifer Lawrence, has been splashed across a wide-range of magazine covers. All this has lead to plenty of cultural commentary. Is Jennifer Lawrence too pretty, too “fat”, too old, to play Katniss? Is Katniss a feminist? Is she a role model for girls? Is the movie too graphic? Did Collins steal her story from “Battle Royale”?

I just thought it was a terrible movie.

The movie opens with Katniss singing to her younger sister, Primrose. Both sisters are pretty; the house they are in seems rundown. Then, Katniss is off and running, with a full-screen shot showing her to be a young, fit, athletic woman for, you know, someone living in an area with no food. Where is she going? She climbs through an electrical fence that doesn’t appear to be working, and goes deer hunting. She finds a deer. She loses the deer. She finds a deer, she loses a deer. She’s about to kill the deer when some dude comes trapsing through the woods. He says “Whatcha gonna do with a hundred pounds of deer?” Apparently, Katniss the Hunteress wasn’t ready to deal with, had never considered for a second, gutting and packing deer. But she can wield a bow and arrow.

Katniss and her buddy Gale (speaking of miscasting, this actor who I have never seen before looks thirty and has a massive chin) sit atop a hill overlooking a lush valley. The camera shots, colors, framing, and sound all indicate a romance, not a dystopia where there is no food and they live in abject poverty under the crushing rule of a totalitarian government. No, what is important here, as framed by the film, is looking good while talking to your buddy. Oh, and this: don’t like the Hunger Games, then don’t watch!

Back to home, where everyone except Katniss looks like a cliched idea of a farmer living in the Dust Bowl, the set and clothing returns to some vague 1930s drabness. All the people from the district are rounded up to hear who is chosen for the Hunger Games, as selected by Elizabeth Banks, who for some reason is dressed like an extra from a Tim Burton movie.

Let’s stop here. I have not read the book. I have brought nothing from the books to the movie. I simply have the synopsis of the film (and lots of hard-to-avoid media hype) to get me moving forward. So, I’m wondering things like: what happens in this district? As far as I can see, people wash their clothes and go off into the hills to eat bread with their not-boyfriend. How large is District 12? What do people do here? Because from what the film has shown us, I know absolutely nothing about the world that Katniss is in. Like, when Katniss and Gale are talking about the Hunger Games, I wondered “Why do people from the district watch it?” What is it, really?

What I’m saying is that twenty minutes into the film, what I’ve been given is a narrative with more holes than Swiss cheese that seems to not know what it is interested in, other than framing a pretty actress named Jennifer Lawrence in every shot.

Compare this movie to The Running Man, a 1987 Arnold Schwarzenegger movie based on a Stephen King novella. The movie opens with Arnold in a helicopter. Arnold is a military man. There is a food riot in progress. Arnold is told to kill them. He refuses. He’s beaten senseless and thrown in jail, where all the inmates wear explosive devices around their neck that detonate if they cross an invisible perimeter.

Now. This is not to say that The Running Man is a good film. What it does do, however, is demonstrate very early on what world the movie exists in. There is a context for what comes next—Arnold escapes, Arnold is captured, Arnold is put on a game show where the contestants all die.

The Hunger Games? No context. After all, I was apparently supposed to have bought and read the entire book triology, so why present a cohesive film narrative?

The next forty minutes of the Hunger Games is a beauty pageant. Really. For forty minutes, Katniss is told to make sure people like her. Again, I’m not sure why. There is “weapons training” which consists of each kid showing off a skill, like throwing a knife, which is weird since I thought the whole region was malnourished, except for, apparently, all these extremely good looking and extremely healthy looking kids. They all wear tight outfits to showcase their sinewy muscles and lovely curves. Also, they are teamed up with the other kid in their district, even though they are all supposed to kill each other until there is only remaining, and they go on a television show to give interviews with some dude with blue hair because … well, again, I don’t know why.

All of this is, unsurprisingly, incredibly boring.

The one exciting moment of the movie is when all 24 kids first enter the battlefield. They stand for sixty seconds, all looking at each other and, in front of them, a cornucopia of weapons. Katniss has been advised not to go for the weapons, but grab supplies and head for the woods.  Which she does. With about forty five seconds of sloppy camera work, the film then tries to convey the brutality of what happens next, which it could, even with a PG-13 rating, if the direction was competent (think of the moment in Fight Club when Edward Norton beats Jared Leto: you don’t really see the beating, but you see the reactions of the men watching, which tells you everything. Often, the best horror comes from what you imagine rather than what you see).

Anyway, lots of kids get slaughtered, not that you, as an audience, care. Katniss runs to the woods. Katniss stays alive, and moves away from the other kids. This seems smart. Apparently, though, there is a timeline for the show to air (again: why I don’t know; remember The Truman Show, and how a good narrative can easily frame some of these questions?) so the producers decide to get Katniss moving by STARTING A FOREST FIRE. Which can, it seems, be turned off again with the click of a button. Um, what?

Katniss gets treed like a raccoon, and then proceeds to knock loose the hive of some super genetically modified bugs to kill everyone below her. If this seems like it’s awfully convenient, don’t worry, almost everything in this movie is! Katniss gets gifts in the movie, three if I remember right, that appear on little floating parachutes (no one else gets these, for some reason) whenever our girl gets in trouble. The rules of the Games, which have been around for 74 years, are modified three times for Katniss, you know, just for the hell of it, because apparently things like teenage crushes or refusals to kill have never happened in the previous eight decades. Why worry about what happens in a coherent movie when it’s all going to be turned upside down in ten minutes anyway?

Also, remember the gatekeeper and keymaster from Ghostbusters and how they turned into dogs? The makes of The Hunger Games decided to steal those demon dogs from a 1984 Bill Murray movie and make these pooches chase Katniss for a while. They were conjured out of thin air! Why? How? Who cares!

Because the movie/book is supposed to somehow be political, there was a weak revolt in District 11 when Rue dies (an insignificant character who, again, you don’t really care about, but she’s cute and nine years old or something, so this is important), but its shot with the type of bored focus a director gives a story thread that he couldn’t care less about. It also, like everything else in this movie, makes no sense, because, certainly, revolts in a district have certainly happened before, right? No, never? Not in 74 years? Really? Anyway, there is a weakly ineffectual setup for the second movie that will probably be out in a few months. The end.

Two and a half hours later, here’s the takeaway from The Hunger Games:

This is the message. It’s loud and clear. And it’s incredibly disturbing.

The other two massive franchises (which is what we have to call them, franchises, not even books or narratives) have been Harry Potter and Twilight, which have shaped, for better or worse, the reading temperament of the vast majority of people under the age of 25. Here’s what Stephen King said about those two:

Harry Potter is about confronting fears, finding inner strength, and doing what is right in the face of adversity. Twilight is about how important it is to have a boyfriend.

The Hunger Games is rather clearly in the Twilight camp.

When I think of other strongly females in significant lead movie roles over the last, say, forty years, I think of three: Ellen Ripley (the Aliens trilogy), Sarah Connor (the Terminator series), and, weirdly, Rose Dewitt Bukater from James Cameron’s Titanic. The last one might make you think “Huh?” and it kinda snuck up on me, but it’s the most recently memory I have of a big female lead who generated such interest from the viewing public. One might throw in Thelma & Louise, too. Otherwise, you’re stuck with Geena Davis’s career (how’d that work out for her?). In the media, Katniss has been compared to these fictional female characters. But in this film, she has been reduced to a Miss Teen USA.

A quick and easy response to this is that in order to appreciate the movie, I had to read the book first. Let’s say I buy that. Let’s say I don’t realize that film and print are two entirely different mediums and that even if you know what happens—say, I dunno, like in that Shakespeare fella’s plays—a film still must create a coherent and unified vision of what the narrative is about. Because, I’ve been told, what makes The Hunger Games a compelling book is that it gets inside Katniss’s head, and the book is striking because of her interior thoughts. This is the best thing about the book. I’ve been told this repeatedly.

Does the movie make any effort to bring this interior life to the screen? Of course not.

Everything that is compelling about the book, whether you’re a Battle Royale dystopia person or a Katniss’s internal conflict and thoughts person or something else, the movie doesn’t even begin to explore. Nope.  Instead, this movie is a bloated, lazy, incoherent mess, the type of cynical and unimaginative filmmaking that has ruined Hollywood. There was a chance for something more from this movie, and instead we get easy banalities and a trite love triangle.

What a tremendous waste. 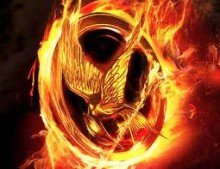