This debut short-story collection from Queen’s Ferry Press (October 2012) is made up of nine stories about people who find themselves at difficult turning points in their lives—times when they are faced with hard choices, broken promises, and the fear of self-destruction. These characters are diverse: a film projectionist, a second-generation comic book store owner, a vascular surgeon at one of Boston’s premier hospitals, an ex-baseball player turned financial advisor. All these characters attempt to smash through the inexplicable glass ceiling of their lives and make sense of a world that, more often than not, defies them at every turn.

In “Union Terminal,” a self-made businessman hides his brother’s alcoholism as he sits by the bedside of their father, an overweight ex-con contemplating open heart surgery, tentatively exploring the layers of their history. “Projection” is the story of a college student who spends her last summer before graduation working as a film projectionist whose new boyfriend may have an explosive secret of violence. “The Utility Room” is about a young divorcee who rents out a spare room in her house to a mysterious adulterous couple, and their haunting infidelity allows her to strangely reclaim her lost sense of self. In “The Re-Creationist,” a veteran of World War II thrives as a baseball broadcaster mastering the art of “re-creating” games, only to find that the new post-war era has discarded the imagination for the furious speed of modern technology. The stories in this collection are startling and realistic evocations of the lives of memorable characters, told with energy, compassion, and grace.

Reviews of Strategies Against Extinction

“Michael Nye’s debut collection, Strategies Against Extinction, does not simply introduce the reader to roughly a dozen separate lives; it reaches emotional depths not often touched in the short form.”
—Nick Ripatrazone, The Journal

“Nye approaches characters with a kind of compassion and patience . . . creating stories that all deal with denial, loss and estrangement at some level. He delicately speculates on the order and patterns his characters weave in the havoc of their lives, but he never rushes the process.”
—Laura Straub, Paste Magazine

“What propels this collection is the urgency to survive every type of calamity: career uncertainty, loss of a home, physical combat, divorce, and death of a loved one. The strategies Nye’s characters employ are as complex and varied as the wondrous species presently roaming the earth.”
—Ursula Villarreal-Moura, Necessary Fiction

“Although characters are often bewildered and bereft, these stories aren’t bleak. Nye holds his characters in sharp focus, and their emotional lives are rigorously yet sympathetically observed.”
—Publishers Weekly

Praise for Strategies Against Extinction

“Most first books of fiction tread uncomfortably close to the writer’s life. But here’s a debut collection of stories that takes us to some unexpected and remarkable places: a ’50s-era sports radio broadcast, a vascular surgeon’s worst moment, a bracing encounter with Vladimir Putin. Michael Nye has written his way across the divides of time and gender and place and has occupied nine diverse lives. The insights he arrives at are sharp and memorable. The writing is finely crafted. Strategies Against Extinction is an auspicious first book.”
—John Dalton, author of Heaven Lake and The Inverted Forest

“With astonishing insight and poignant precision, Michael Nye exposes the devastatingly subtle consequences of betrayal, the frangibility of our human bodies, and the quiet intensity of our desire to transcend grief and restore our families. The poet Seamus Heaney says: ‘The way we are living, timorous or bold, will have been our life.’ Strategies Against Extinction is a piercing reminder of our transient existence, a quiet cry in the night that swells to an aching song of hope, an aria of love surging beneath rage, delivering us from fear, and sustaining us through sorrow.”
—Melanie Rae Thon, author of In This Light and The Voice of the River

“Michael Nye’s collection delivers story after story of Americans circling the twenty-first century drain—some even struggling not to go down the tubes. A subtle and striking debut from a writer to watch.”
—Aaron Gwyn, author of Dog on the Cross and The World Beneath

“Michael Nye has written mature stories of men and women surviving, seeking identity, their unique places in the uncontrollable, ever-changing world. Faced with their own choices, they accept, they move on, they survive. The reader struggles with them on their journeys, involved in their strategies against extinction.”
—Mary L. Tabor, author of The Woman Who Never Cooked and (Re)Making Love: A Memoir

“In his first collection, Michael Nye shows he has the heartbeat of a seasoned veteran of prose. The writing sizzles here with raw and touching characters. The mishaps, mistakes, misfortunes, and miracles meld to form something wonderful and real.”
—Ryan Stone, author of Best Road Yet

“In this collection of finely tuned, acutely observed stories, Michael Nye writes with eloquence about loss—of marriages, of jobs, of brothers or parents, of love and dignity—and how imagination, as a response, can sometimes yield danger but more often, salvation. Strategies Against Extinction is a remarkable and affecting collection by a promising new voice.”
—Maureen Stanton, author of Killer Stuff and Tons of Money

“The range of characters and actions in Michael Nye’s first collection is not only refreshing, but it announces he is far from a one-book writer. Nye gives us Vladimir Putin wrestling with a former Ohio governor in one story, and a woman who rents her ex-husband’s study to a couple who need it for afternoon trysts in another. In Strategies Against Extinction, we get to know a film student who yearns to escape her hometown, a Pirates broadcaster who is not important enough to travel with the team and must re-create the action as if he were watching it, and a surgeon who trains a new doctor to be tough enough by taking her hunting. Nye’s characters do not merely think and wish and yearn, but rather they act, they do, they struggle in surprising and shocking ways. This one is exciting.”
—Mary Troy, author of Beauties and Cookie Lily

“Precise and affecting, these stories have the slow gravitational pull of quicksand: before you know it, you’re sucked into tales of men (and women) ravaged by forces beyond their control—economic, technological, cultural, political. Rich in the arcana of outmoded machinery and masculinity, these stories portray men at loose ends in peacetime, people coming to grips with ineluctable change. In one of the best of these stories, we learn about the last “re-creationist” for the Pittsburgh Pirates, a guy who in 1952 announced out-of-town games that he could not see, imagining the plays from ticker-tape summaries which he translated for his rapt radio audience, much as Nye translates for us this bygone world of men. At their best, these stories achieve what we hope great fiction will—they reveal in miniature whole worlds.”
—E.J. Levy, author of Amazons: A Love Story and Love, in Theory

“The stories in Michael Nye’s first collection unfold in straightforward, nearly transparent prose. But the magic is the life that pulses just below the surface, as fragile and relentless as the human heart. These stories remind me of Richard Ford’s brilliant early stories in the way that plain-spoken people try to hold on as their lives spin, almost imperceptibly at first, out of control. The cumulative effect is uniquely moving. The emotional impact, however, is far from ordinary. Read Nye now so you can say you knew of him back before everybody else.”
—Daniel Stolar, author of The Middle of the Night 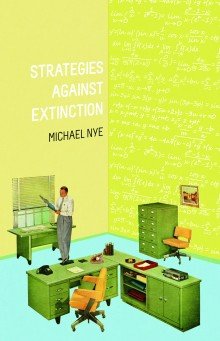