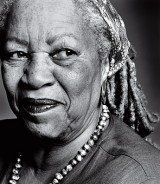 What I remembered about the novel is a point of pride: I remembered that the same passage I did not like was the same one that, in the afterword, Morrison herself wrote was the least satisfying passage in the book. As an undergrad, I was delighted to learn that my initial response was the same as Morrison’s. This meant I was “correct” and that I “got” the novel. Or, something like that, in the way that I liked to think of the world when I was twenty-one. END_OF_DOCUMENT_TOKEN_TO_BE_REPLACED